Tools To Help On “Those” Days?!

I was in the mood to waste a few minutes.

What better way to waste time than reach for my phone, open the app and descend into the time-wasting abyss that is Facebook?!

My good buddy Paul posted something about "plodgering on..."

Being a bit of a "wordsmith," I asked him if there was such a word because I'd never heard it before.

He suggested I Google it, and I discovered it means a combination of "plodding, slogging and soldiering on when life, and our own unhelpful habits, push back." 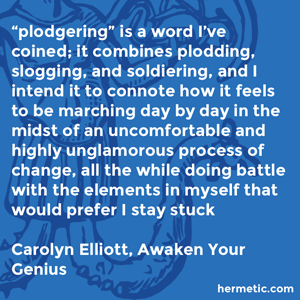 When were young we expect life to be great when we're adults.

I certainly expected that I would have enough money to buy all the ice cream I could eat!

But I discovered that although I could buy all the ice cream I wanted, I didn’t want to eat gallons of it and that I had to spend my money on things that aren't much fun, like the electricity account.

I remember when I was about ten, moaning to my Uncle about the problems in my life and looking forward to a time when I wouldn't have problems.

He calmly informed me that, "adults have problems too."

I can't remember whether I felt relieved to hear that, or depressed - probably depressed!

I know now that a life without problems doesn't happen, but I still think a part of me holds on to and dreams of a time when my life will be all sorted out - and everything will be great.

And although I know that won't happen - I still feel a little disappointed when life doesn't go "my" way.

It's even harder when you feel things are coming together, you feel like you're making progress and then things turn to custard.

Wandering into gender generalizations, I feel many men in relationships have a weakness for "achievement failure."

I remember trying to console my girlfriend who was upset because her Father, although he lived in the same city, did not make the effort to contact her.

I'm not excusing his actions, but I tried to ease her upset by explaining how some men's brains work.

I said, "if a man feels like a failure, rather than feeling his failure, he will often just avoid the situation altogether," and will justify this by thinking, "they're better off without me."

If her Father was aware of the effect this was having on his daughter, the fact that he spent so much time sitting at a bar with a beer glass in his hand did nothing to help.

It seems to me that women's weak spot for failure lies in the length of their relationships.

From what I can tell, if a woman has been a part of a relationship for 20 years, they are considered a success, but if they can't hold a relationship together, that represents some sort of personal failure.

(However, I'm frequently wrong, especially when making assumptions about women, so please feel free to correct me on the blog here!)

What's all this got to do with plodgering?

Because "plodgering" is what life consists of: "plodding, slogging, and soldiering, marching in the midst of the uncomfortable, unglamorous process of change, while battling with the parts of myself that would prefer I stay stuck."

Plodgering is not giving in to feeling like a "father failure" but continuing to hang around even if you feel you've messed up.

Plodgering is not labeling yourself as a failure if your relationship doesn't work out.

To me "plodgering" is standing at the crossroads and choosing the narrow path - the path where you've got to dig a little deeper, and do a little work by staying with what's uncomfortable - and sticking with the way that leads to growth.

The other fork in the road is the wide, easy way where you don't have to do anything difficult or stay anywhere uncomfortable.

That's why I love that quote above from Elizabeth Taylor, she had a difficult childhood and a dramatic life, so she's someone I'm happy to take inspiration from.

I'm sure if I could sit down with her, she would say she'd had many "plodgering" days - days like I'm having today, but that's ok, I'm plodgering on!

If you're having a plodgering day, here are some life coaching tools for inspiration!